Joined Nov 24, 2010
·
14,585 Posts
It is that time of year where you are starting to dig out your tree stands, ladders and gear out of the shed and boots out of the garage. Plus going to the cabin and getting stuff out from under cabinets and beds and just whatever else is in a cabin. just be aware where you put your hands especially in normally dark places.

I think most people know of some one who has been bitten by a Brown Recluse and either just got sick with a little bit of skin eatin way, or hospitilized with major infection. Years ago a guy I knew lost his lower leg due to a bit, but he also had diabetes. My sister in-laws niece's daughter died this last week from complications of a Brown Recluse, we do not know the details yet.

I know of a lease I was invited to join, the cabin had not been cleaned in years. I went up on a week day and put bug bombs in each room, then went and cleaned every room, could not believe all the spiders, spider eggs and bugs I found through out the whole house. Ceiling fans had 1/4 of greasy/smokey dust on them. I still slept in my sleeping bag.
any way I digressed
just be careful out there 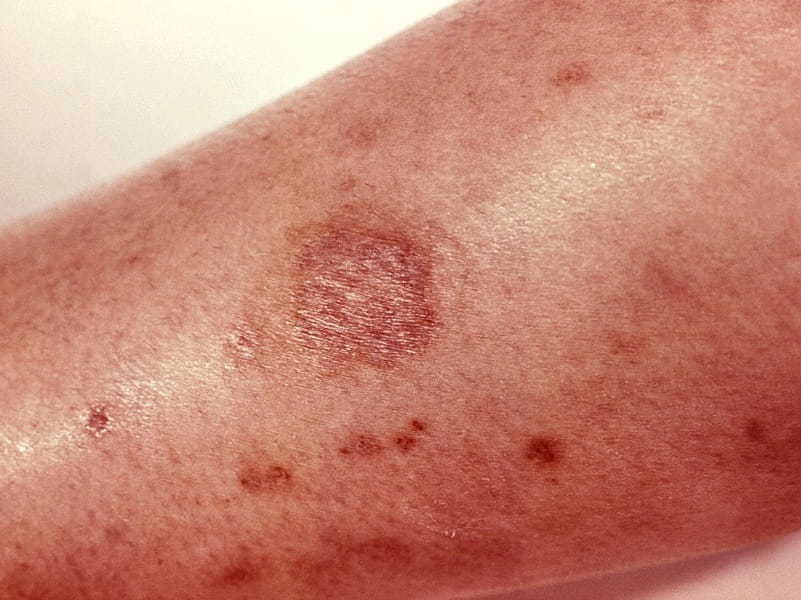 The Bottom Line
Brown recluse spiders are rarely seen or identified. A brown recluse spider bite often is not felt when it happens. The complex venom causes injury and death (necrosis) of the surrounding tissues. In severe cases, the venom can damage deeper tissues. Serious illness and death are rare. There is no antidote; treatment includes treating the wound and preventing infection.


The Full Story
Although reports of bites from a brown spider that caused severe tissue damage and even necrosis (tissue death) can be found as early as 1872 in the U.S., it was not until 1957 that the brown recluse spider, Loxosceles reclusa, was identified as the likely culprit. Today, the brown recluse spider is one of the most medically important spiders. Of the many thousands of spiders we come across, it is one of the few that not only can bite humans, but whose venom can cause serious wounds and poisoning.
The name "reclusa" describes the spider’s behavior – it avoids humans and human activity, lives in dark and quiet places, such as basements and woodpiles, is active at night, hides its web and is rarely seen. Even though it avoids humans, it bites when threatened. This usually happens when a previously dark and quiet place – like the garden gloves or boots you had stored in your garage – is suddenly disturbed when you put them on.
The brown recluse spider is recognized by the unique violin-shaped marking on its back, with the neck of the violin pointing towards the rear of the body. As its name suggests, the spider is tan to brown in color. The violin-shaped marking is a darker brown. There are no other markings, such as stripes or bands, on the rest of its body or legs.
Although the violin-shaped marking is easy to identify, the most unique feature of the brown recluse spider is its eyes. While most spiders have eight eyes, the brown recluse has six eyes arranged in three pairs in a semi-circular row.
An adult recluse can be as big as a U.S. quarter, including its legs. Within the Loxoceles family of spiders, the brown recluse is the most widespread in the U.S., and is commonly found in Southern and Midwestern states.
The brown recluse venom can destroy human tissue. The victim may not feel or notice the bite when it occurs. At first, the bite site may appear like any other insect bite - a little red, itchy and inflamed. Over the course of a few days, the venom destroys the surrounding tissues. The wound gets larger, more painful, and darker in color. Necrosis or tissue death is identified when the tissue becomes black in color and forms a crust that eventually falls off. The venom can penetrate deeper in the tissues, sometimes affecting the fat and muscles. Often, the bite of a brown recluse spider leaves a crater-like scar after it has healed completely.
The wound formed from the venom can quickly and easily allow an infection to set in, worsening the wound-healing process. The infection as well as the venom can also spread to the rest of the body and possibly become life-threatening.
It is very difficult to diagnose a brown recluse spider bite unless the victim felt the bite and saw and correctly identified the culprit. Many other conditions can mimic the bite of a brown recluse spider: bacterial, viral or fungal infections; other insect bites; and medical conditions that affect blood circulation. An educated guess can often be made based on a careful history obtained from the patient.
There is no antidote for the brown recluse venom. Treatment is targeted towards specific symptoms.
Although it is not easy to completely avoid the bite of a brown recluse spider, there are a few steps that can reduce the risk.
If you suspect a brown recluse spider bite, wash the bite site with soap and water. Then call Poison Control at 1-800-222-1222 or use webPOISONCONTROL®
to get help online. The nurse or pharmacist who answers your call will tell you what to do. If you need emergency care, the poison specialist will contact the emergency room staff with treatment advice.

Horse ****. I see them every time I go to my barn. Two or three regularly patrol my work bench and scatter when I turn on the lights. If I really look for them I can find dozens. We find them in the house occasionally, those are quickly dispatched.

I was told the only way to be sure is to move everything out of the basement, unpack all the boxes, look for and dispatch any spiders you see in your stuff, spray the basement thoroughly and put everything back.

Diamond Outlaw Compound Bow
Joined 7 mo ago
·
7 Posts
I've been bitten by a brown recluse. I was loading up my jet ski after a long day of tearing up the lake and as I was strapping down the rear I felt a sting on my upper thigh. My immediate reaction was to slap the area as hard and fast as I could (I guess I initially thought it was a horse fly). I wasn't a licensed driver then so my mom was driving us home. As the trip went along, I noticed some swelling in that area and a distinct red circle with a small whitish dot in the middle. My mom, being country folk, immediately diagnosed it as a brown recluse bite. So off to the Indian hospital we go. They confirmed her diagnosis and gave me a shot and some pills to take over the next few days. Maybe an hour had passed from time of bite to getting the shot so the doc said he doubted any tissue loss would occur and he was right. I never had any tissue loss or anything else whatsoever.

So, please, if you are bitten seek medical help immediately. Much cheaper than an amputation, physical therapy, and hospital stays.

Joined Dec 18, 2005
·
13,101 Posts
I find them pretty regularly in my basement and occasionally upstairs in the tub. They are thick in my shed too. If we can avoid letting **** pile up on the floor, we see them far less often. We do put out traps but we don't catch near as many as I thought we would tbh. Either they are smart enough to avoid them or we don't have as many as we think.
1 - 9 of 9 Posts
Join the discussion
Continue with Facebook
Continue with Google
or sign up with email
About this Discussion
8 Replies
7 Participants
Last post:
seth_turner_04 3 d ago
Missouri Whitetails - Your Missouri Hunting Resource
A forum community dedicated to Missouri Hunting enthusiasts. Come join the discussion about safety, gear, tackle, tips, tricks, optics, hunting, gunsmithing, reviews, reports, accessories, classifieds, and more!
Full Forum Listing
Explore Our Forums
Whitetails General Turkey Hunting General Guns & Ammo Duck & Goose Hunting Deer Management, Habitat & Conservation
Recommended Communities